To help you understand a little bit more about this congregation, we offer this brief history.

Berkey Avenue Mennonite Fellowship began in 1979 with members from Waterford Mennonite Church, East Goshen Mennonite Church, and a smattering of other congregations in the Goshen area. The first worship service happened on July 28, 1979 at Bethany Christian High School. Attendance ranged from 28 to 50 persons during the first few months. That November the congregation moved to the Mennonite Mutual Aid building in Goshen (now Everence), where it met for nearly two years. Because the German Baptist building only consisted of what is now the sanctuary, the congregation immediately broke ground for a 4800 square-foot addition to the building. The congregation officially moved into the new building on July 19, 1981, with the dedication service taking place on October 25, 1981. In 1982 the average worship attendance reached 189, which remained the highest average attendance until 2004.

In September 1992, the congregation adopted a motto that came out of a church leaders’ retreat in 1987: “Called to be Christ’s loving, healing, caring presence.” This motto has remained at the heart of the congregation’s self-identity ever since. Enthusiasm began to build and worship attendance increased after reaching a low of 113 in 1991-92.

In 1995-96, the congregation built a new Christian education wing along with offices and a library/conference room. In 1997 members unanimously approved a “Vision and Strategy for the Future” which embraced intimacy and invitation as primary values. This vision recognized the tension between these values but encouraged the church to value both equally. It further encouraged the church to maintain strength in worship, mission, and nurture while strengthening its welcoming ministry. At the start of a new decade, three significant events occurred. First, long-time pastor Anita Yoder Kehr announced her resignation in order to move to Kansas. Second, the congregation recalibrated its vision to focus more on spiritual practices that draw us into intimacy with God and each other, as well as a new emphasis on living (rather than just being) the presence of Christ in the world. Third, the members adopted a revised structure to more clearly distinguish governance (provided by the Spiritual Leadership Team) from program ministry (provided by the pastors, commissions, and volunteers).

In 2011, the congregation fulfilled a long-standing dream when it bought the red house next to the church building, allowing for possible expansion in the future. A renovation project in 2010-11 upgraded the kitchen, carpet, wall paint, sanctuary lights, and speakers. A permanent visual installation called “Trees of Life” was also added. In 2013, two new paintings were hung in the fellowship hall to remind the congregation of its motto and to help prepare people for worship. A second renovation project in 2013 created a larger nursery and more usable classrooms. 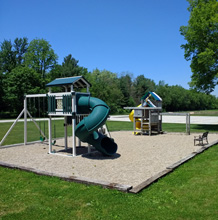 By 2017 our average attendance grew to 190 people, often reaching over 200 people on Sunday mornings. Our parking lot was no longer adequate. Some people helped the situation by carpooling, parking at the nearby school and walking, or biking from their homes. However, it was apparent that to be more welcoming, we needed to increase the size of our parking lot. In June 2017 we increased our paved lot to accommodate an additional 48 cars. Landscaping was added to beautify the area. Later that summer we joyously upgraded our playground for our many families with young children to enjoy. 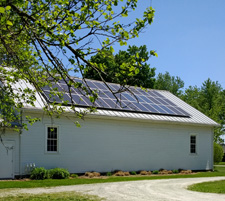 Keeping in line with our care for the earth, in November and December of 2017 a number of courageous Berkey attenders installed solar panels on the west side of the sanctuary roof. Two inverters were placed in the basement, with a capacity for adding more panels in the future. The panels included 42 panes which can potentially produce 13.6 kw. The installation was paid for by donations from the congregation and a grant from Mennonite Creation Care Network.

In 2018 our Spiritual Life Team (SLT) hosted a series of World Cafés, a methodology for hosting large group dialogue. The focus of the cafés was to create a welcome statement specifically for the LGBTQ+ community. Great care was taken to hear everyone’s voice through the café process, large group discussion, and one on one discussion with a member of the SLT or pastor. During a congregational meeting on October 28, 2018, the congregation approved a Welcome Statement.

Near the end of 2019 the pandemic COVID-19 swept across the globe, reaching the United States in January 2020. On March 6, the first known case was confirmed in Indiana. In response, Berkey closed its doors to in-person meetings and services. Although the March 15 worship service was cancelled, subsequent services resumed the following Sunday through Zoom, an online communication platform. During this time Berkey worked on creative ways of maintaining fellowship and caring for one another online, through mail and through phone calls. We also looked for ways to help others in the community financially and by connecting persons to local food delivery systems. Individuals in the congregation were also encouraged to volunteer in various ways to benefit the community including sewing masks for medical personnel and by donating children’s books which our local school handed out at food distribution points. In-person services resumed in September of 2021 with continued option to join worship over Zoom. 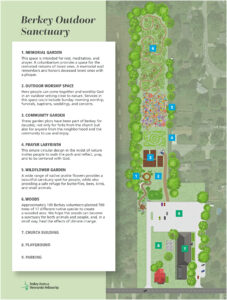 In 2021 the congregation made plans to develop the three acres of land on the north side of the church parking lot, creating the Berkey Outdoor Sanctuary. The sanctuary includes six parts: a memorial-meditation garden, an outdoor worship space, community gardens, a wildflower garden, a prayer labyrinth, and a forest. We hope these different outdoor spaces of sanctuary can be a safe place in our community for retreat, reflection, worship, and celebration.

Berkey continues to look for ways to put hands and feet on its priorities and to be open to the new visions that God offers.