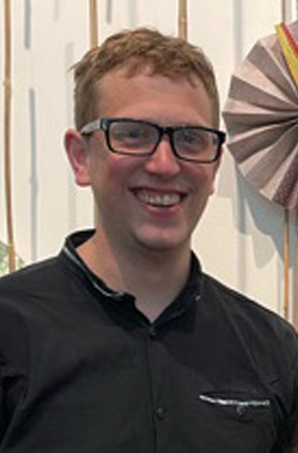 Billy joined Berkey’s pastoral team in September of 2022. He’s focus is primarily on faith formation and Christian education with the youth and young adults. His ministry also includes preaching and pastoral care.

Billy was born and raised in Gallup New Mexico, after which he attended Goshen College from 2008 to 2013, receiving a double major in History and Theater. Billy met his wife, Alita Yoder, in college and shortly after they married and moved to Chicago where Alita received a master’s degree in Nursing and Billy studied and performed improv comedy and worked as a server. In 2018, Billy and Alita moved back to the Elkhart area, and in 2019 began attending Anabaptist Mennonite Biblical Seminary alongside working in construction. Billy is excited for this next part of his journey and first pastorate at Berkey.

Billy and Alita are looking forward to becoming part of the community at Berkey. Alita works as a Site Administrator for Maple City Health Center. Billy and Alita have one child.